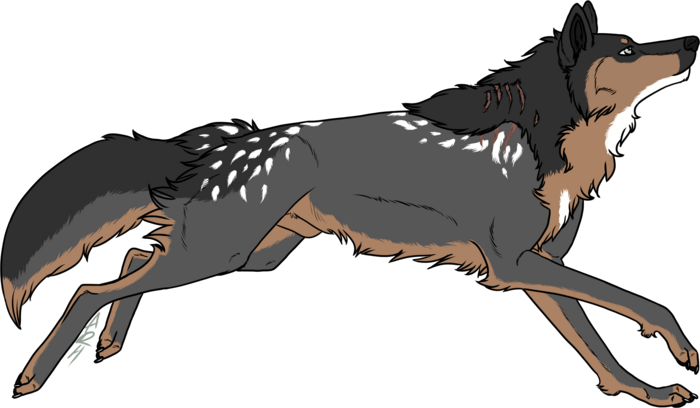 Ame
with every rain brings a fresh breath of life

He was back to checking on the lands, seeing how they were doing. The night beasts having vanished a while ago, Ame knew the balance of the lands had settled back into place. Prey and other predators didn’t respect or care for the changing of pack politics or borders so he knew little would change there. Time had also passed since the failed mission to Iromar. It weighed heavy on Ame, but with Halcyon fixed up and now tucked into the borders of his niece’s pack, there was little more Ame could do for him but keep an eye out for his son now that Iromar had changed paws. Perhaps he could try to talk sense into him if they came across one another. Still, he had his own things he liked to ensure.

The self proclaimed ecologist and naturalist of Moladion wanted to make sure all the prey and non-wolf predators remained balanced as they could be. Prey commonly got wiped out in areas, and he would always inspect what prey was there and do his best to move herds of deer or whatever else by harassing them to the areas that needed them most. Usually things worked themselves out. Ame noticed that things happened in cycles. Prey would vanish, wolves and other predators would move giving time for the prey in another area to recover. His mother taught him that the creatures, other than wolves, also had feelings and a place in this world, that deserved to be helped and respected. Without them wolves wouldn’t be able to live after all, Ame never took more than he needed, but he knew not all creatures were that way.

A loud roar was the first thing that alerted him to a problem. Bear. Angry. At what? What reason? Territory? Food? Defence of cubs? There was a small list of reasons a bear could get hostile, but all of which were reasons wolves too could get aggressive. His slate and tan form moved quickly towards it, though he moved quietly. If it was between their own species he was going to stay out of it. There would be no reason for him to get between two quarreling bears, but soon as he heard a wolf’s yelp he was moving faster, charging at the bear from behind and nipping harshly at the bears legs that were still on the ground.

A snarl ripped from the male, in an attempt to make himself as loud and as large as he could. His hackles were forcibly pushed up as high as they could go, his tail up and behind him, though despite his aggressive appearance his eyes were set, and even. His aggressive act was all for show after all, he wasn’t about to pick a fight with a bear, but most bears didn’t want to fight with a larger adult male wolf either. They might win the war, but the damage a wolf could do wasn’t generally worth the benefits of tangling with him. The creature wheeled around to face him though, giving another mighty roar of irritation, but didn’t back down immediately much to Ame’s annoyance, but he didn’t budge either. He knew he could out run this bear for days, and circles around it if nothing else but his eyes didn’t budge, nor did his puffed up form. He wasn’t a huge wolf by any means, but he wasn’t small, he was down for a stare down until it charged and gave chace or backed down, either way the wolf on the other side would be safe.