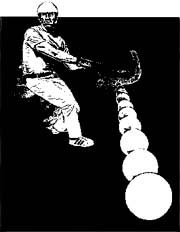 In prior seasons Magic City had a 2-tier system: early games and late. This year, when the roster was at full strength, they worked out 3 tiers. Then came injuries and the virus, so back to 2 tiers.

Since I very much want to know how a given player does against each class (as opposed to a 'projection' method, where you say, "If he did this in earlies, will he probably do this in lates"), this frequent shape-shifting of game classes presents a problem.

In years gone past, there was a lot more stability, such that if I wanted to isolate Dania elite singles games, I could just look for { type = singles, points = 7, and game = 10 or 11 } and haul in a decade's worth of data.

However, it is obvious that these days relying on the game number to tell you the type and / or class of a game is no good. So a couple weeks ago I bit the bullet and devised some code to let the computer work that out for me. In the process of doing that, I came up with a very objective way of rating the singles opponents from the point of view of each competitor.

So here is what I see for El Barba as of last Sunday:


The first column is the number of games that were evaluated, and the second is how the formula rates the player vs his opponents.

The anomaly with Douglas is based on the small game sample.

I won't give the details of how it works, but it is not the usual style of purely looking at game records. With the exception of cases with low game counts, every player had Douglas at #1, and Kubala at #5. Ronron mostly #2.

Anyway, for the player in question, in this case El Barba, his score would be 1.0, so you can just look up and down to see he compares to his rivals.

Since I have seen many people in chat calling El Barba the worst, I thought I'd present something with no element of human judgement.

It clearly backs up the idea of him being in the middle.

Last thing is that this is NOT a final ranking system, because each player would produce his own, probably different list. However, a combination of all the lists could be used for ranking.

Do you want to post on Chalk Talk?
In order to post your own messages on Chalk Talk, you must first register as a member.
USE THIS LINK

USE THIS LINK to register.
Do NOT use the link above the posting box that says 'You must register ... register here'. It will not work.
Please report problems/questions directly to the Den