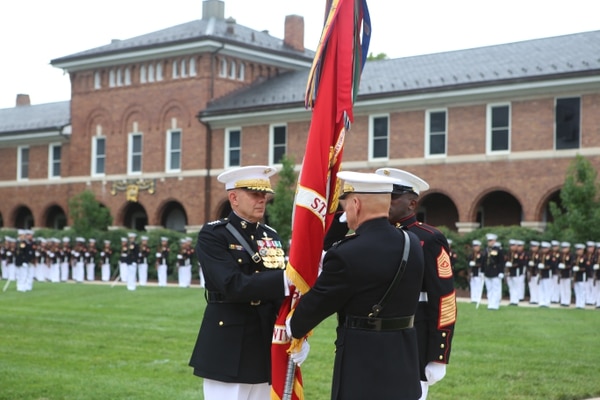 “We will never send our Marines into a fair fight,” Berger told those in attendance.

“I know we need to modernize the Marine Corps,” and need to train better and recruit the best people, he said. “Marines are different;" they are not defined by equipment or vehicles, but by their warrior ethos, he said.

Berger now presides over a Marine Corps at an inflection point as it continues to modernize its force for a fight with rising rivals like Russia and China.

Here are some key issues Berger will face as the top Marine:

— The Corps’ flex to the Pacific: The Marine Corps is amid one of its biggest movement of Marines across the Pacific since World War II, as the force preps for a fight with a rising China. Marines are decentralizing their forces off Okinawa, Japan, and across the Pacific in places like Australia, Hawaii and Guam.

But, Congress may call for a review of the Corps’ Pacific posture, specifically a plan to relocate nearly 5,000 troops to Guam.

Modernizing grunts: Outgoing Commandant Gen. Robert B. Neller already has started to equip grunts with new weapons and tech from automatic rifles, new night vision, shoulder fired rocket systems, tablets and drones. But, a decision on the rifle squad composition will rest with Berger. The 26th Marine Expeditionary Unit is about to kick off an experimentation with the first 15-man rifle squad to forward-deploy.

Manning the future force: The Corps has some serious manpower crunches within key high demand occupations like cyber, F-35B pilots and intelligence. Recruiting that talent into the Marine Corps among a talent pool across the U.S. that is already stretched will be a major challenge for the Corps.

Gender integration: The Corps is still the only branch to not have a co-ed boot camp. The Corps kicked off its first attempt at gender-integrated recruit training aboard Parris Island, South Carolina, in early 2019. Berger told lawmakers during his confirmation hearing that he was open to doing another gender integration experiment aboard the East Coast recruit training depot.