Naval Academy superintendent says Class of 2019 has record graduation rate, number of students heading to grad school
Posted on 5/24/2019 at 18:15:46 by Will Croom 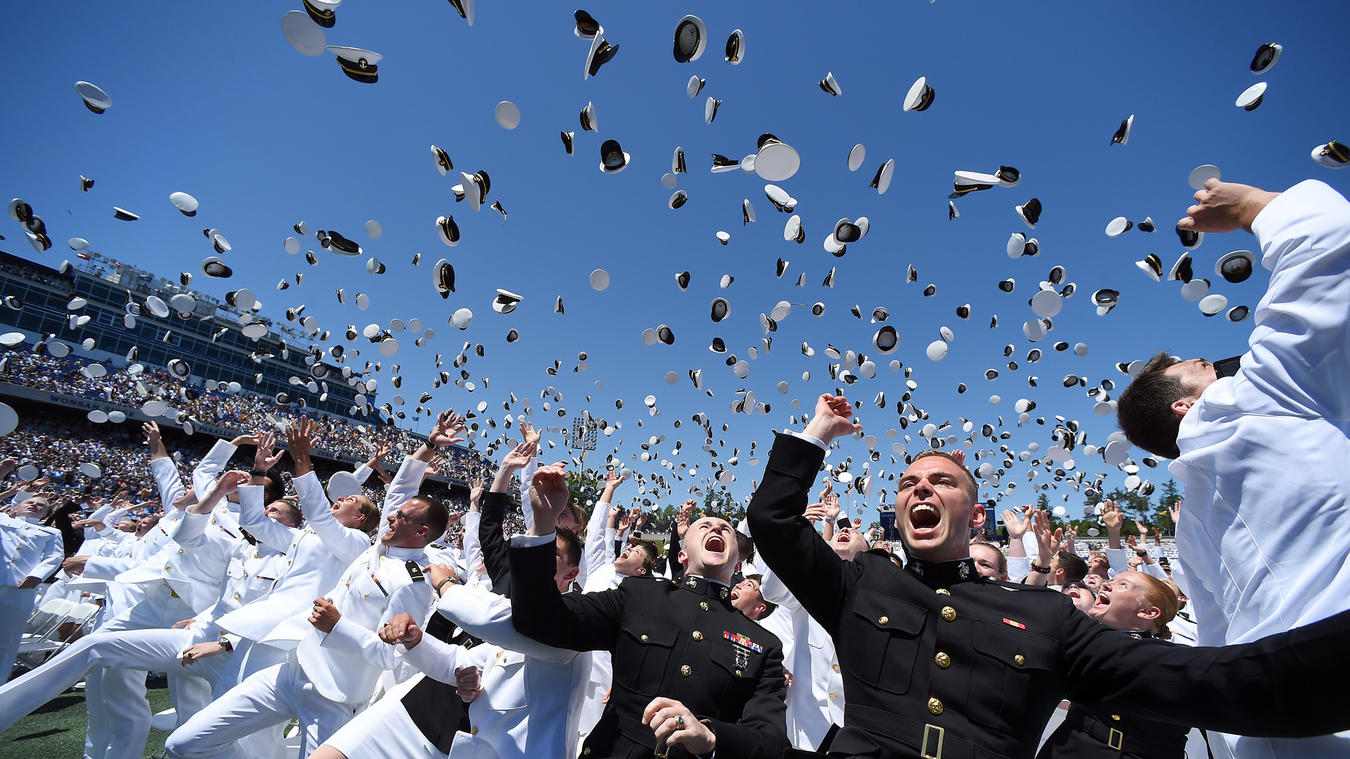 Friday morning 1,052 midshipmen were sharing laughs and hugs in the shade behind a jumbotron at Navy-Marine Corps Memorial Stadium, prepared to march onto the sunny field where they will be commissioned as officers.

By the end of the day there will be 265 newly commissioned Marine Corps 2nd Lieutenants and 769 Navy Ensigns, according to information given out by the academy’s press office. Estimated attendance for the graduation is 25,000.

“This class, by almost every measure, is the best class we’ve ever graduated from the United States Naval Academy,” Superintendent Vice Adm. Ted Carter said before the secretary’s remarks.

He said the class had a record graduation rate of 89.9%, and also record number of students headed to graduate school, 81. He told them in the Navy and Marine Corps their acts and not their words would speak for them, and discussed a famous quote from Theodore Roosevelt, commonly tied to his foreign policy approach — “speak softly and carry a big stick.”

Carter said they will inherit some great hardware in the Navy and Marine Corps, but that’s not the stick he sees.

“As I look across this graduating class, let me tell you that it’s the diversity of which you bring as the class of 2019, not just gender diversity, not just ethnic diversity, not just religious, economic, geographic, but the diversity of your thought,” Carter said. The tools that this institution has given to you will make you critical thinkers with the ability to analyze and take that and lead men and women at peace and war.

The Secretary of the Navy Richard Spencer also spoke before Shanahan, asking the group to put their academic achievements to work immediately and relentlessly.

Shanahan gave the soon to be graduates three pieces of advice. When the project or mission appears difficult, stay the course. “Don’t you dare quit.” He pointed to a time when he was transferred from a successful industrial plant, to oversee a failing one. “I had the option to say no, but I said yes, I wanted to test my metal.”

Put the mission before your career, Shanahan said. If you do so, he told the midshipman, "your career is far more meaningful.”

“Think, don’t copy,” Shanahan told the impending officers: reject the status quo. Now more than ever before, the status quo isn't good enough -- with new threats, technology. “We need you to come up with innovative solutions to new problems.”

When you experience ethical failure, stand your ground. "The toughest person to stand against is your teammate," he said. “I need you young (officers)... to set the standard of preventing sexual assault in our ranks. The status quo won’t cut it.”

Shanahan told the families he doesn't take lightly his responsibility to put service men and women into the way of harm. “I will continue to give those orders, but only when absolutely necessary,” he pledged.

n closing, he said, “A ship in port is safe, but that’s not what ships are built for.” Think, don't copy. Stand your ground. Remember who you are. “You're joining the finest and most feared Navy and Marine Corps team in the world. Keep it that way.”

Hannah Lindsay of Pasadena, 22, a graduate of the Catholic High School of Baltimore studied English at the academy and will go to medical school in the fall at the Uniformed Services University in Bethesda.

She said her grandfather Richard Smith, a combat veteran and former paratrooper who served in Vietnam, inspired her to join the military.

“He was the first person who really told me that I could be an officer,” she said.

When she first arrived at the school she wanted to be a surface warfare officer, but said she has an interest in science and also saw going into medicine as a way to combine her interest in caring for people with a military career.

She also knows she is ready to be an officer and command others because she has experience doing it at the academy. She was a detailer for the class of 2022 last summer during their “plebe summer,” caring for a squad of 10.

“That was the first time that I felt like I could be an officer in the fleet. Like I was prepared for what was coming,” she said.

She said her proximity to the academy growing up also inspired her — she wanted to be like the people she saw in Annapolis with the white uniforms.

It’s the same for Zach Abey, a Spalding High School graduate who studied political science and will commission as a 2nd Lt. in the Marine Corps. He said he attended Navy games when he was young and set a goal for himself at a young age to attend the Naval Academy.

“Seeing all the mids walk around town in their whites, you can tell they have a sense of pride about them, and that’s something I’ve always wanted,” he said.

The former Navy quarterback will help out with the school’s football team until December, and then go to The Basic School to begin his training as a Marine.

Mary August, a Rockbridge Academy graduate, is also headed to The Basic School.

First, she'll learn to be a good Marine, she said, then a good pilot.

"That's going to take a couple years,” she said.

She said graduation is a surreal experience.

"The fact that we were little baby plebes, now we're going to be officers," she said.

Jay Wallen, of the 19th Company, a graduate of Rockbridge Academy, said before the ceremony he was reminiscing with his peers.

They were talking of plebe summer, "remembering how scared we were," Wallen said. Graduating and becoming an officer "doesn't really quite feel real."

As he looks to the next chapter -- Navy Post Graduate School in Monterrey, California and then flight school in Pensacola -- he couldn't help but think about the similarities to plebe summer.

After working their way up the ranks at the Academy, "you get knocked back down to the lowest level again," Wallen said.