Navy assistant football coach Billy Ray Stutzmann says he was fired over refusal to take COVID-19 vaccine
Posted on 9/17/2021 at 14:50:31 by Will Croom 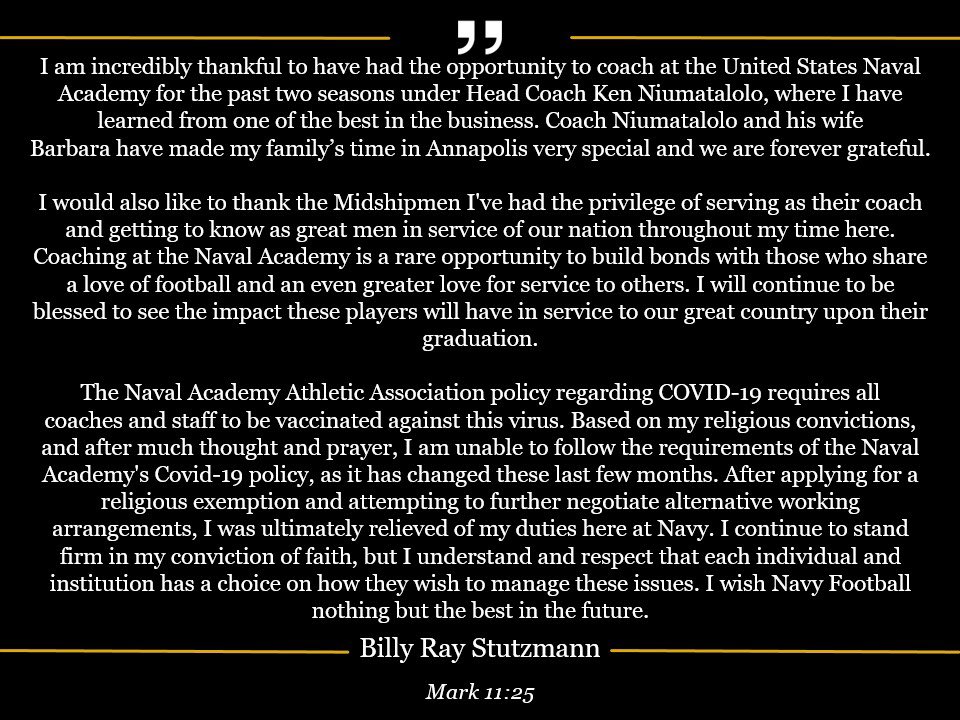 In a tumultuous day for the Navy football coaching staff, offensive assistant Billy Ray Stutzmann says he was fired for not complying with the program's requirement that all staff members receive a COVID-19 vaccine.

Stutzmann made the announcement on social media Monday, writing that he is "unable to follow the requirements of the Naval Academy's COVID-19 policy." He wrote that he applied for a religious exemption to the requirement that wasn't granted.

"After applying for a religious exemption and attempting to further negotiate alternative working arrangements, I was ultimately relieved of my duties here at Navy," Sutzmann wrote. "I continue to stand firm in my conviction of faith, but I understand and respect that each individual and institution as a choice on how they wish to manage these issues."


Stutzmann declined to clarify what about his faith prohibits him from taking a vaccine that is proven safe and effective at thwarting the transmission and personal and public health impacts of COVID-19.

“He’s added a lot to our program,” Niumatalolo said Monday, per the Associated Press. “Wish him the best of luck, he and his wife Shanelle. Wonderful young man. Got a bright, bright future in this profession.”

Another Navy staffer thought fired is back
While Stutzmann lost his job, another Navy assistant who was thought to be fired after Saturday's loss to Air Force is back on staff. Longtime offensive coordinator Irvin Jasper will remain with the team in a new capacity.

Niumatalolo said that the initial decision to fire Jasper was made by athletic director Chet Gladchuk. The program decided to retain him in his secondary role as quarterbacks coach after further discussion. Niumatalolo will take over offensive play-calling duties.

“It was an unfortunate situation," Niumatalolo. "There’s some emotion involved, obviously, but we just lost a big game. I think cooler heads have prevailed.”
Replies:
There have been no replies.