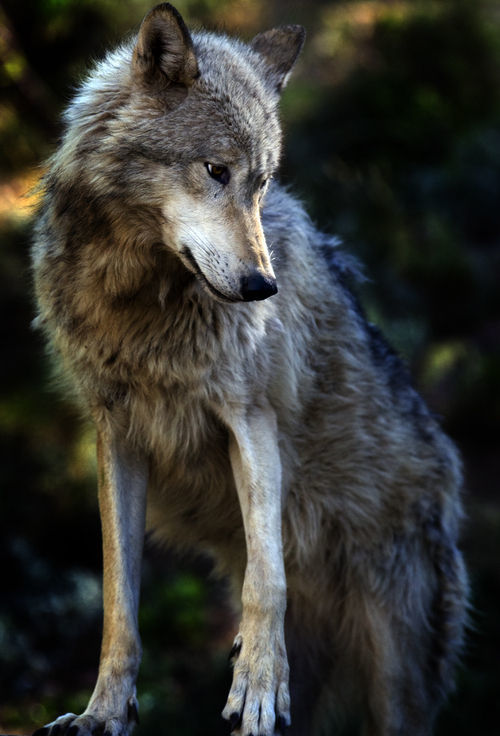 Alana’s eyes fastened on the new wolf, taking in her appearance. The newcomer’s body was even more fragile than hers, so she did not fear for her safety. That is, she did not fear from her safety until she was warned of the potential danger behind her. She takes her eyes off of Leviathan for a moment – showing either naivety or trust – to look back to the cave, now more wary of what it’s darkness may contain. She stepped out of the shadows slightly, now more cautious of the dark shelter than of the open.
When she had traveled with her mother, she had never needed to fear shelters, for her mother knew where was safe and where was dangerous. Those tricks for safety, however, had not been passed on to Alana. If it were not for her quick thinking in times of danger or stress, she would never have made it even this far. Thankfully caution and stealth were on her side, and she had avoided any horrible situations so far in her life.
Thank you, Leviathan. I’m not quite used to these lands. I am Alana.
She was not afraid of this strange wolf – perhaps it is folly, but then with her cautious nature, perhaps this lack of fear was an actual sign that she really was not in danger from this other female. Now out of the dark of the cave, she looked over this other female. While Leviathan was taller than her, she was proportionately lighter, as had been Alana’s first impression. She seemed healthy, however, and had clearly been more well-fed than Alana currently was.
I don’t know this land, as I said, so I have not heard of this Glorall, but…
She paused here, hesitating to admit anything to one she did not know.
I…I am rather tired of being on my own.
She tried to smile back at Leviathan, the expression muted by caution but honest all the same. Some of the tension that had been apparent in her muscles when she had first noticed the other had vanished through the conversation.
I haven’t really done anything worth telling, I’m afraid. I used to travel with my mother, but…well, now I’m on my own.
At mention of her mother, some of the tension had returned – it was not a subject she liked to recall – but she disguised it quickly enough, brightening as she spoke of being on her own. She was proud of having made it to this new land, even though it was more through luck than skill.


OOC: sorry that took a while, I live near Boston so things were a bit crazy recently